What is a nitrogen stripper

Manure is the largest source of nitrogen on the farm. This occurs in the form of ammonium or organically bound nitrogen. In addition, manure consists of 90% water. Circular Values was the first in the Netherlands to see the circular value of this and developed the Farmcubes Quadro Nitrogen Refining so that only the excess components are disposed of in concentrated form. The nitrogen is recovered in a liquid inorganic fertilizer such as ammonium sulfate or ammonium nitrate.  This results in a high quality fertilizer substitute, which brings in money. Ammonium sulfate is an important fertilizer for the plant that contains both nitrogen and sulfur. With the production of liquid ammonium sulfate on own soil, manure disposal costs are actually yields and there is no need to purchase fertilizer. This provides economic benefits for land-based dairy farming.

In the nitrogen stripper, ammonium nitrogen, present in the thin fraction, is converted into gaseous nitrogen (ammonia). Ammonia is normally formed in the barn where it can escape as an emission stream, but in this system it is formed in a controlled manner and actually prevents emission. The ammonia passes through columns and is washed to produce ammonium sulfate. Nitrogen refining can operate using heat and/or pH increasing agents. 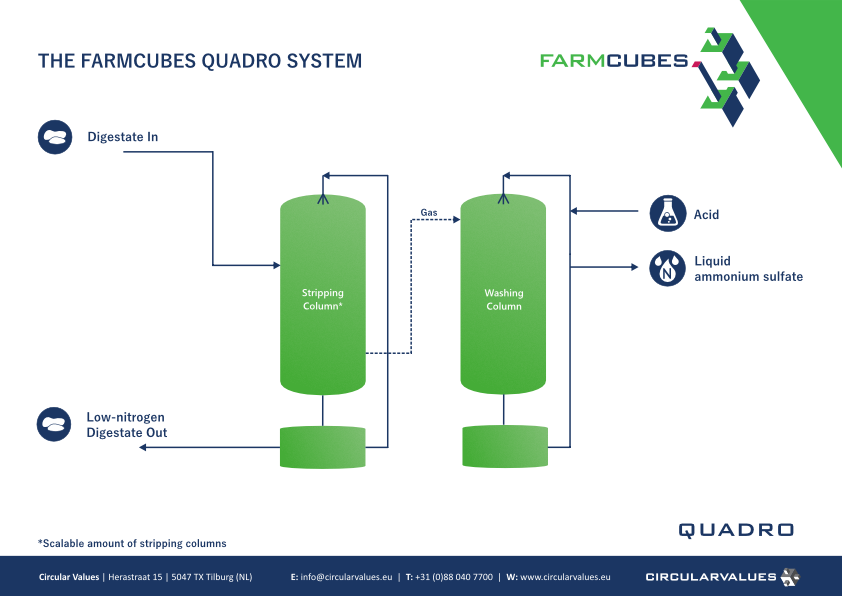 The Farmcubes Quadro Nitrogen Refining comes as a stationary and mobile refiner. The mobile version makes it ideal for contractors who can use it to serve the land based livestock industry where the purchase of a stationary nitrogen stripper is not cost effective. The output of the Farmcubes Quadro is adjustable and Circular Values can also monitor and control it remotely so we can always provide our customers with the service they need at the right moment. Circular Values also offers leasing options for its Nitrogen Refining products and also VAMIL/MIA is applicable, which can be even more economically beneficial for the dairy farmer.

The Farmcubes Quadro is the Netherlands' first nitrogen stripper. Circular Values has years of experience in developing, manufacturing, installing and maintaining nitrogen strippers at various livestock farms. For every dairy farm we have a suitable solution. Feel free to contact us and ask for the possibilities!